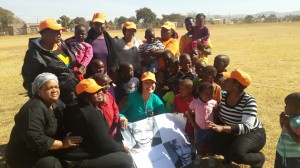 South of Africa gave back to the community on Madiba’s birthday by taking time to give a hearty meal to underprivileged children of Bosele Dawn Drop In Centre in the township of Bela Bela. Staff from the group’s Head Office and its Elephant Springs Hotel in Bela Bela spoiled the children with a bowl of hot soup and vetkoek on this cold winters day, as well as fruit juice and sweets.

South of Africa’s Khatija Mahomed said that the 67-minutes gesture celebrated on former President Nelson Mandela’s birthday was something South of Africa supports strongly, and the decision to return to the Drop In Centre was an easy choice. “It is our social responsibility to create a better South Africa, and what Madiba did for this country should also be done by all South Africans. Even the smallest gesture of goodwill has a positive influence on the lives of others.  Last year’s event was met with such positivity that we returned with love and appreciation for the work done at the centre.”

The properties Birdsong Cottages and Modimolle Funky Stay also joined forces and spent their 67 minutes helping out at the local FH Odendal Hospital in Modimolle.  According to General Manager Joseph Mabote the local hospital is an essential part of the community’s daily lives and that it is everybody’s duty to help not just on Mandela Day, but every day of the year.