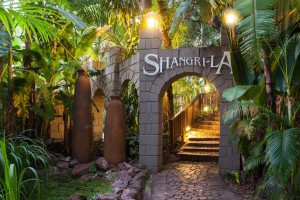 The delightful country hotel and spa, Shangri-La, has received its 4-star grading from the Tourism Grading Council of South Africa.

“We’ve been working extremely hard,” says General Manager, Ken Strydom, “this past year.  We set out at the beginning of the year to achieve the 4-star status, and through the combined efforts of everybody involved in Shangri-La, we’ve achieved it.”  An elated owner, Mr Johan Jansen van Vuuren, smiled from ear to ear.  “When we purchased Shangri-La in 1990 and opened our doors, our aim has always been to provide an unforgettable experience.  Shangri-La has been graded as a 3-star property in the past, but when we began with the major renovations in 2010, it was a dream of ours to achieve this.  This past year, that dream became a reality.”

Van Vuuren, who, alongside his mother, Mrs Anndeline Jansen van Vuuren, are currently creating the most astounding new gardens at Shangri-La, says that despite the 4-star grading, customer service will remain of the highest standards that were set when the hotel opened 24 years ago.

The star grading will be celebrated in the new year, however guests visiting during the festive season, will be amazed at the new changes upon arrival.  Says Strydom, “We’re looking forward to welcoming the world to Shangri-La this holiday season to have an out of this world experience.”