The second part to the Shangri-La blog by Erik Brits features the delightful Zen Garden! 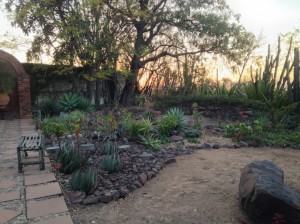 I’m currently committing a horrific injustice. I’m sitting in a Zen garden, frantically sending emails and writing blogs. Someone should whack me on the head with a pot of green tea and confiscate my toys… but seeing as I’m all alone in this utterly tranquil spot, I guess I’ll write you guys a blog and worry about my soul later!

I’ve always thought of Zen gardens as a polarized affair – either in the city, filled with hipsters, or out in serenity, filled with spiritualists. On top of that, I would never have thought that it makes sense to build one in the bushveld, because the bushveld is already tranquil enough. Now that I’m sitting here, however, it all makes sense. The garden at Shangri-La Country Hotel is not an alien landscape of black and white pebbles, but instead a perfect amplification of the area’s natural ambiance. The succulents are awash with the buzz of insects, the shade under the trees makes  lovely respite from the baking sun on the rock patches, and the birdsong is slowly lulling me to sleep.

On the far side of the garden, a family of banded mongooses are chasing the vervet monkeys in circles as they battle for supremacy of their four square metres. Perhaps a reminder that life is bigger than you think, and that I should put the laptop away now. Seeing as the squirrel-sized guerrilla fighters are nigh-on impossible to capture on camera, you’ll have to settle for the sun setting in the garden, while I settle into a siesta.