South of Africa honours its employees 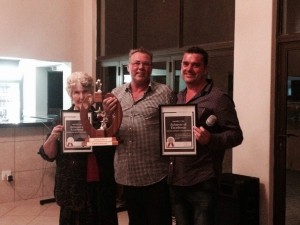 Johan and Anndeline Jansen van Vuuren received the Achiever of Excellence Award for 2014.

South of Africa recently held their Year End Function at a local resort in Bela Bela.  Heads of Departments, General Manager as well as Head Office employees were all invited to a fun-filled day of team building, followed by an afternoon of leisure, and ending with a prestigious awards ceremony and dinner.

General Managers of each establishment called forth their individual property’s Employee Of The Year.  This honour went to Lizzy Taolela from Elephant Springs Hotel & Cabanas, William Matlala from Shangri-La Country Hotel & Spa, Shylock Marakalala from Modimolle Funky Stay, Johanna Maluleke from Birdsong Cottages and Toni Markus from Abalone House & Spa.  Further awards, including the departmental awards for the best service in Housekeeping, Maintenance and Food & Beverage were also handed to the General Manager.

Amongst the awards handed out during the night, the stand out awards for the year 2014 were:  General Manager of the Year – Pieter Erasmus from Elephant Springs;  and Achiever of Excellence – Johan & Anndeline Jansen van Vuuren for their work at Shangri-La.

Managing Director, Mr Stef Venter, addressed the attendees with a heartfelt speech on the achievements of the group during 2014 and the bright future that awaits in 2015.

Congratulations to all for the fantastic achievements.  We’re looking forward to an incredible 2015.