The event, which was an entire day affair, started off with a meaningful walk in silence at Shangri-La’s Labyrinth, whilst the music “Theme from Time” played in everybody’s ears (courtesy of a little MP3-player gifted to all attendees).  A light breakfast followed, with a game of Musical Chairs leaving the last 4 standing the captains of the day’s planned activities.

Volleyball, Putt Putt and Action Cricket was played thereafter, and all the teams enjoyed the activities tremendously.  Team Australia won the Volleyball, whilst Team Argentina won the Action Cricket.  Johan Esterhuizen from Team Argentina won the Putt Putt!  A delicious lunch of home made pizzas (fresh from Shangri-La’s very own Pizza Oven) was served and everybody had an afternoon of leisure and time to prepare for the evening’s main event: a Gatsby-themed Awards Ceremony and Dinner. 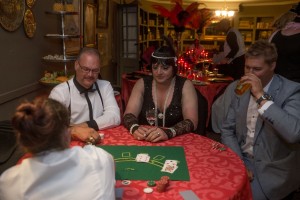 Managing Director Stef Venter presented the awards hosted at the pool area, which included South of Africa’s employee of the year (Joseph Chiliza from Central Reservations), GM of the year (Ken Strydom from Elephant Springs) and Achiever of Excellence (Shangri-La Country Hotel & Spa).  Further awards were handed out for Years of Service, Best Social Media and Guest Relations presence, as well as property level recognition awards and the Rising Star Award (which was awarded to Thabo Mashao from Shangri-La).

Once the drum was sounded, dinner was announced, and the guests of honour were transported to a magical Gatsby-themed gala hall, with superb décor and beautiful displays of the 1920s.  The transformed Boardroom, prepared by our very own in house Projects Manager, Mr Johan Esterhuizen, was a breath-taking sight.  A delicious Dinner was served, followed by an entertaining Casino Night, where everyone had the opportunity to enjoy black jack, roulette and much more.

An extensive gallery has been posted on Facebook which can be viewed here: https://www.facebook.com/shangrilacountryhotel/posts/947356092015104