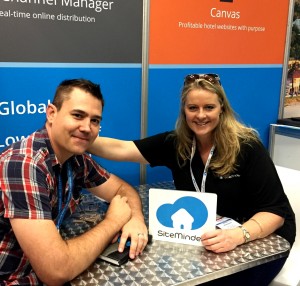 The international trade show Indaba, held annually in Durban, Kwazulu-Natal, once again took place during the Mother’s Day weekend this May.  South of Africa’s Marketing Manager, Egmond du Plessis, attended the Indaba 2016 on behalf of South of Africa.

“It is always a treat visiting the Indaba, and Indaba 2016 was no different.  Albeit a smaller show in comparison to the previous years, the show was nonetheless a very important platform for South African tourism,” says Du Plessis, who manages the online visibility and social media of South of Africa.

A special treat, according to Du Plessis, was meeting the many digital platforms, including booking engine Expedia, and online service provider SiteMinder, which has been SOA’s link to the “outside world” since September 2014.  The informal meeting with Lisa Horne from SiteMinder ended with social media posts from both parties (the picture is featured here).

Social media was also a huge player at Indaba 2016 with a special “big screen” displaying all the hashtag mentions of #INDABA2016 in the foyer.  The three Twitter accounts for South of Africa, Shangri-La and Abalone House all had a moment or two on the “big screen” when the tweets from these accounts showed up on the timeline.

Du Plessis says that the meetings at Indaba 2016 have resulted in great new opportunities which will be making its appearance on many different platforms in the upcoming months.  “Our aim at Indaba is to stay up to date with the latest trends, and meeting with the role players who are at the forefront of South African Tourism is vital and beneficial to our guests.”