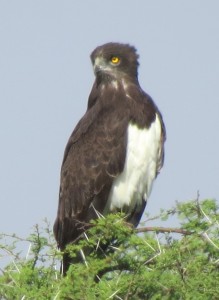 The delightful Birdsong Cottages received its name in the early nineties, when owner Johan Jansen van Vuuren heard the song of the prolific birdlife.  Today, the 7 Birdsong Cottages are named after species that were found on site – the Franklin (the correct name is Francolin), Guineafowl, Kingfisher, Flycatcher, Sunbird and the Owl.

In 2012, bird lovers André and Magda Pieterse, who stayed at Birdsong Cottages, provided future guests with a little gift – a list of 50 bird species that were seen during their stay.  With the attractive dams and bushveld setting free from intimidating human presence, Birdsong has been a popular destination for birds that flock to the farm all year round.

Following a stay over with friends in 2014, Anthony Paton advised of at least 90 species that had been spotted during his visit to Birdsong Cottages, with the definite possibility of it being home to over 100 species.  An invitation to return in early 2015 resulted in an expanded list of over 120 confirmed species, which included such gems as the White-crested Helmet-Shrike (pictured) and the Striped, African and Bushveld Pipits.   Both Brown Snake-Eagle and Black-chested Snake Eagle are amongst the raptors that are often present.  According to Paton, “this list could be expanded to reach over 150 species, and in reality there are probably close to 200 species on the property at some time of year or another.”

The list will be made available to all guests during March 2015 that enjoy watching nature’s aviators in their natural habitat.  Guests are also invited to share any discoveries with Birdsong Cottages, and photographs of any birds spotted here are always welcome.

For more information on Birdsong Cottages, its selection of self-catering units and its various facilities, visit www.birdsongcottage.co.za or visit www.southofafrica.com.  For bookings, call Central Reservations on 087 820 5999.