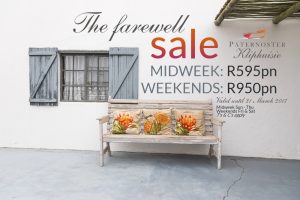 2017 arrived in all its glory just a couple of days ago and with that came a whole new adventure for South of Africa.  The new year also brought new surprises, and it is with great sadness that we say goodbye to our beloved Kliphuisie cottage in Paternoster.

This popular and cosy self-catering unit in the heart of the fisherman’s village has been a unique addition to our portfolio and loved by countless guests since it opened its doors in 2010.  Kliphuisie’s location and rustic character has been its most charming assets.  If you wanted to experience the “real Paternoster”, Kliphuisie offered it. 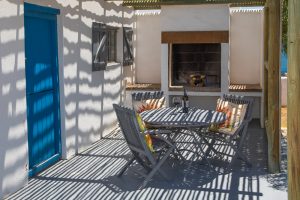 2017 had been planned to be an exciting year for Kliphuisie, with a clever marketing plan already in place to promote this West Coast cottage to an even broader audience.  Says Marketing Manager, Egmond du Plessis, “We’ve been planning a new photoshoot for Kliphuisie for months, and finally set the date for this in early January 2017.  The new photographs were part of this exciting plan which was meant to kick off in time for Valentines month.”  Photographer Keith Reid and his wife, blogger Roxanne Reid, were in charge of this mammoth task to capture the essence of the cottage. The images, which were received on the morning before the sale, will still be showcased on social media leading up to the closure at the end of March 2017.

Kliphuisie has been sold to private local owners who will be turning this much loved “home-away-from-home” cottage into their very own “home by the seaside”.

To send off Kliphuisie in style, which will close its doors on 31 March 2017, we’re saying goodbye with a farewell sale of only R995 per night for weekends (Fri & Sat) and R595 per night for midweek stays (Sun – Thu).  Book your stay online here for one last chance to experience the traditional house of stone holiday makers have loved for the last 7 years.