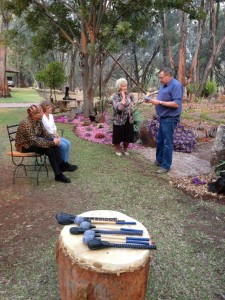 Being synonymous with Shangri-La, Dr Bruce Copley of AAHA Learning recently donated a unique drum to Shangri-La for use by staff and guests.  This very drum was used in the first South African corporate drumming session which Dr Copley and his associate, Phil Richardson, presented at Shangri-La in 1991.

Corporate drumming has evolved into a huge business in South Africa that has very commonly been incorporated into thousands of conferences, launches and indaba’s since the mid 90’s.  It has become world famous and interactive audience drumming performances takes place in New York, China and Australia to name a few, even stealing the show as the opening ceremony performance during the Beijing Olympic Games.

Dr Copley said that “It feels fitting that this drum should find a home in the place where it all started.”  Following the first corporate drumming session at Shangri-La in 1991,  the Drum Café was started under the leadership of Warren Lieberman; inspired by Dr Copley.  The Drum Café is now a world famous drumming franchise.

“I conservatively estimated that millions all over the world, including people like George Bush and Prince Charles, have had a drumming experience that is linked to that first corporate drumming presentation at Shangri-La,” says Dr Copley.  Which in turn makes the drum gifted to Shangri-La the one that started it all.  This sacred Venda Drum and its voice is the heartbeat of Africa that has come home to the “place of eternal youth”.

Dr Copley said that he is donating this drum to Shangri-La as a heartfelt token of his deep appreciation for the magical times and wonderful people who, for more than two decades, have blessed him and thousands of his delegates with unforgettable experiences.  This beautiful instrument’s inauguration took place on 13 September 2013 at Shangri-La during the opening of the Labyrinth in recognition of Dr Copley’s life and work.  Its voice will be a regular reminder of his love and gratitude.