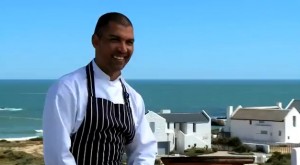 Sensational Afrikaans television programme “Kollig” featured celebrity chef Reuben Riffel in a lengthy interview on the kykNET & kie channel in their episode broadcast on 15 October 2013 at 21:00.

Reuben was interviewed on site at Abalone House, and discussed his decision on launching his brand new restaurant here, spoke about the new menu, and also about his new book “BRAAI, Reuben on fire” (published by Quivertree Publications).

The feature also included a behind-the-scenes look at the photo shoot for the new restaurant, location shots of the beautiful Paternoster, and also showcased the luxurious 5-star Abalone House where the new Reuben’s have opened.

You can view the You Tube clip here.