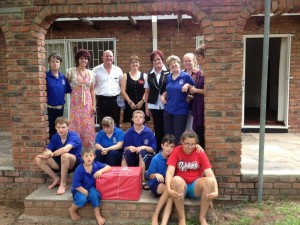 The award winning Shangri-La Country Hotel just outside Modimolle holds their monthly wine tasting dinners on the first Saturday of each month.  Already established as a culinary destination of choice in 2013, for both local and national visitors, Shangri-La’s first wine pairing dinner of the year was held on the 1st of March 2014.  Mr Chris De Klerk from Cape Wine Legends presented the acclaimed winery Zonnebloem.

During this monthly food and wine event, a bottle of the represented estate wine is auctioned off for charity, affording Shangri-La yet another opportunity to support the local community.  Sonstraal School is the latest recipient of Shangri-La’s passionate investment in those in need.  The school will now be able to conduct more effective culinary practical cooking classes for its students.

Mr Ken Strydom, General Manager of Shangri-La, said that he was thrilled by the opportunity that the hotel had to help those in need.  “Because this event has recently become a much talked-about dining experience in the local community, we decided that through involving the community in a way that not only enhances their awareness of the needs of local projects, but also allows them to assist, would certainly make the wine tasting dinners a worthy event to support.

Shangri-La’s Heritage Restaurant recently became affiliated with Chaîne des Rôtisseurs and also boasts an award winning Diners Club wine list.  The hotel is also proud to be the recipient of a Trip Advisor Traveler’s Choice Award for 2014 in the category Bargain Hotels.