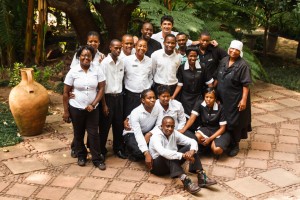 “We’ve done it again!” exclaims General Managers Ken Strydom from Shangri-La Country Hotel in Modimolle, and Leigh Longden from Abalone House & Spa in Paternoster.  The two hotels have both been awarded with yet another Trip Advisor Award of Excellence for 2014.

The award (being the 2nd for Shangri-La and the 3rd for Abalone House) honours hotels that have received a constant stream of positive scores with a rating of 4 out of 5 and higher.  “We’re thrilled,” says Managing Director Johan Jansen van Vuuren.  “When Abalone House received its first award in 2011, I was delighted.  Then it happened again, and Shangri-La joined in the celebration.  To receive it yet again is a true honour and a reflection of the hard work and effort we have put in to our guest satisfaction and customer service.  It’s remarkable and we are so grateful that our guests made this happen!”

According to Guest Relations Manager, Mr Egmond du Plessis, the amount of guest reviews have increased tremendously during the past year.  “The most popular platform for our group is Trip Advisor, and South of Africa takes pride in responding to each of our guests reviews as within 24 – 48 hours.  We value our guests feedback and use this as a tool to ensure that our customer service is of the highest standard,” says Du Plessis.

Apart from Shangri-La and Abalone House, newcomers to Trip Advisor include Birdsong Cottages and Modimolle Funky Stay, who both also average a 4 out of 5 rating so far.  “We’re putting in a lot of effort to also achieve these awards,” says General Manager Joseph Mabote of the properties.